Kampot is Cambodia’s getaway. Although the coastline isn’t developed for tourism, the province has everything else for those who want some clean country air, impressive scenery, and opportunities for activities as well as rest and relaxation. Kampot is also unusual in Cambodia because it has a product that is internationally recognized and sought after – Kampot pepper.

Kampot Province is on the south west coast of Cambodia on the Gulf of Thailand. Kampot town, the province’s capital, is located on the Kampot River, just a short way south east of Bokor Mountain national park. Kampot province also encircles Kep Province – a tiny, recently created province with a few sandy beaches that serves as the beach destination for the region.

Kampot has a population of around 640,000, with most people working in agriculture. Kampot is slowly developing as a holiday destination, although it is generally overlooked for Sihanoukville by locals and tourists alike. However, Kampot has much to recommend it, being rich in history as well as attractions.

One of the most popular day trips in Kampot is to Bokor Mountain national park. It is possible to book a trip with a guide and minibus to take you around, or the adventurous can go trekking instead. Before the Khmer Rouge, Bokor was a small resort town, and home to one of the King’s Residences. It had been established as a small community by the French, with a Catholic church and a luxurious hill station. Now, many buildings lie derelict and destroyed by conflict, and there is just one very large hotel on the mountain (owned and established by the Cambodian government). The main attraction for many people is in the history of the area, the stunning views of the surrounding countryside, and the lovely waterfalls.

There was intense fighting on Bokor Mountain during the civil war as the area was a Khmer Rouge stronghold. Many atrocities took place in the old buildings on the island, and there are very knowledgeable guides in the area who lived through much of the conflict who give visitors a history and stories of the region. As a result, a trip to Bokor can be both a beautiful and eerie experience. Mist often shrouds the hills, and combined with the derelict buildings really give the impression of a ghost town.

The Kampot River is an attraction in itself, and no stay in the region is complete without a boat outing or canoe trip to take in the scenery. Boat trips are relaxing and cheap. It’s especially nice to go at sunset and watch the sun setting behind the mountains. An equally relaxing experience is wandering around the town and sampling a variety of small coffee shops and social businesses in the area. The town is calm and peaceful and it’s easy to while away an afternoon just enjoying the atmosphere and watching the world go by.

Visitors may also enjoy visiting one of the pepper farms in the region. Many are well established with small tours to show visitors the farming process, and shops selling their product. Kampot pepper is famously enjoyed with shrimp or crab, and the local restaurants can provide this succulent seafood dish at very reasonable prices.

Also in the region is Teuk Chhou, just a few kilometres upriver of the town. This is an area of rapids which also has a small island and some local restaurants It’s a great place for tubing, relaxing and swimming. There is also a zoo nearby, although the project has been involved in some controversy in recent years, so interested visitors should think about researching their visit first before choosing to visit.

In Kampot town you can also find mini-golf, petanque, quiz nights and movie nights. Organized for the benefit of locals and expats, they are low-key and welcoming. It is also possible to rent motorbikes in Kampot – although those who do are best having good insurances, as moto theft is becoming a problem in the area, and accidents are common.

Kampot is especially popular with cyclists, as the hills provide a little more of a challenge than many other parts of Cambodia! There are numerous trails and tracks that provide a great day’s bike ride. One such ride is across the hills from Kampot to Kep. Around 40km one way, it’s a fun ride with a rewarding small beach at the end. Just a short ride from Kep is the island of Koh Tonsai (or Rabbit Island) that is popular with visitors for day trips to enjoy its sandy beaches, clear waters, comfy hammocks, and amazing sea food in the tiny beach restaurants.

Kampot is historically quite diverse. When the French arrived in the mid 19th century, they recorded many Chinese, Vietnamese and Malay villages in the region. However, this diversity is now almost completely gone, with just a few hundred Vietnamese families remaining. The French were the first to really establish any infrastructure in the area, and under their stewardship Kampot became one of Cambodia’s most important ports.However, Kampot saw a great deal of fighting during the civil war and the Khmer Rouge era, leaving many of the old colonial residences destroyed or derelict. The Khmer Rouge fought an intense battle with the Cambodian army to capture Kampot in 1975, and the area fell to their control in 1974. Khmer Rouge factions were still active in the region long after the fall of the regime, and true peace only came in 1998 following the death of Pol Pot.

Kampot is subject to more changeable weather than other parts of the country as not only is it on the coast, but the proximity of the Bokor Mountain affects the climate. In rainy season Kampot can be really very rainy, and the relatively basic roads outside the town center can make some areas impassable due to water and mud. However, as with much of Cambodia, rain storms tend to clear quickly and so most days will enjoy at least some sunshine. Kampot is a great place to visit in dry season, as the river and the mountains give access to refreshment from the intense heat and dust. 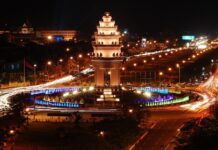