As with many other Eastern nations, Cambodia does not traditionally celebrate New Year on January 1st. While some celebrations do occur at this time, as well as at Chinese New Year in February, Cambodia considers 2013 AD to be 2557 BE (Buddhist Era) and the traditional day of the New Year usually falls on April 13th or 14th. The traditions and celebrations are similar to Thingyan (Burmese New Year), Thai New Year and Laos New Year – all of which follow similar yearly calendars and observe the Buddhist Era year count.

Many people attribute the history of Cambodian New Year – or Khmer New Year – to agricultural and seasonal rhythms of the year – it signals the end of the harvest season and the beginning of the rains. Another theory is that it is down to the adoption of the lunar calendar – or a close connection with the Hindu calendar. Traditionally the celebrations would last for one month – 2 weeks before and 2 weeks after the specified day. Today, there are three public holidays given around this time, but many businesses and institutions close for longer as people like to return to their hometown to celebrate and spend time with their families. As a result it is helpful to plan carefully when traveling in the region at New Year as transport services can be exceptionally busy but city streets and services remarkably quiet.

The three official days of New Year celebrations have strict religious and social traditions associated with them, which many people still observe.

Day 1: Maha Songkran. The word songkran comes from the Sanskrit word Sankranta for movement or change. Maha simply means “big”. This day officially marks the end of the last year and the beginning of a new one. On this day, it is customary for people to dress up nicely and burn incense and bring flowers and gifts to the temple to offer thanks. It is also considered good luck to wash hands in the morning, chest in the afternoon and feet in the evening. This ritual bathing has been taken to the extreme in Thailand, where Songkran water festival is now synonymous with city-wide water fights. This is not practiced in Cambodia, although many people choose to receive full-body water blessings from monks as part of this cleansing tradition. In addition, many people will enjoy showering each other with white powder (talc powder usually) both in fun and as a symbol of cleanliness.

Day 2: Virak Wanabat. On the second day of celebrations it is traditional to exchange gifts with relatives (especially children giving to parents and grandparents) and to those less fortunate – either through donating money to charity or supporting poorer families in the community. People also gather together at the temple to build a mountain of sand in honor of their ancestors. The sand mountain has a central peak, surrounded by four smaller peaks, representing stupas dedicated to Buddha and his disciples.

Day 3: To ensure good rains in the coming year, statues of Buddha are washed with scented water. Sometimes people will also bathe monks in the same way, or their parents and grandparents. It is considered to bring long life and good luck. On this day (and the days following) a much-loved tradition is to play traditional Khmer games with friends and neighbors.

It is more common for children to enjoy these games, but often adults will join in the fun too. Some games are very traditional and others have been incorporated from different cultures and customs.

Clay pot prizes: Thin clay pots containing flour and a small prize (usually a sweet) are strung up on rope between trees. A participant is blindfolded and spun around. They are given a long stick with which they have to try and smash one of the pots. They follow the directions of the shouting crowd to try and line themselves up and connect the stick with the pot. If they are unsuccessful after a few attempts, the next person has a turn. If they are successful, the pot breaks, showers them with flour, and deposits their treat on the ground!

Ongkhun: Ongkhun is a type of vine in Cambodia which produces round, flat seeds about 2 inches in diameter. Ongkhun are pressed into the ground as targets and participants stand a few meters away and try and knock the targets out of the ground with their collection of Ongkhuns. The person who hits the most targets wins the game.

Chhoung: This is a very traditional game especially popular with children and teenagers as it usually revolves around which boy likes which girl and vice versa! The game is played with a big group of people (between 10 and 20) split into boys and girls. The “chhoung” is a tied-up scarf that is thrown between the two teams. The teams stand in a line, facing each other. One team throws the chhoung high in the air towards the other team. If a member of the other team catches it, they then throw it very quickly at a person in the opposite team that they like. If the chhoung hits the person, then the whole team – led by the person who was hit – sings and dances and returns the chhoung to the other side. After the chhoung has been returned, the process starts again.

Khmer New Year is a very special time of the year in Cambodia. Many families host parties, and hire large sets of speakers to play dance music and entertain their guests and neighbors. Businesses will often throw parties for their staff and give presents and provide food. With the tragic events of the Khmer Rouge and the following civil war still within living memory, the opportunity for spending time with family and celebrating peace, long-life and prosperity is very important for many people. It is common for families to open their houses to visitors to join their celebrations and they are often are delighted to have international guests sharing in their celebrations. 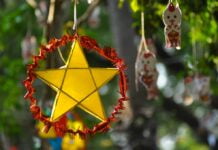